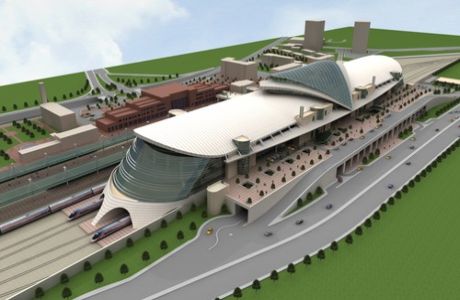 ANKARA:  Turkey is aiming to finally open a high-speed railway between Istanbul and Ankara in February, 2014 after several delays, a transport ministry official said on Tuesday. The $4 billion (3.0 billion euro) railway is the latest in a number of ambitious and often controversial urban development projects by the government of Prime Minister Recep Tayyip Erdogan.“The line is expected to open in February but it might be delayed,”  the official said, without elaborating.The government had announced that the high-speed link between Turkey’s capital and its biggest city would be inaugurated in late October or early November, but it was delayed for safety reasons, according to the official.

Transport Minister Binali Yildirim had said on Monday that development projects worth a total of 86 billion Turkish lira ($42 billion, 31 billion euros) would be completed in six years.

The Istanbul-Ankara line is part of a wider project to construct high-speed railways in 15 cities, Yildirim told reporters at a budget meeting. “The testing for the line has begun,” he said.

The railway will slash travel time between the two cities to three hours, with trains travelling at up to 250 kilometres an hour.

Currently, the journey takes about eight hours by train or six hours by bus and at least five by car.

The line will also be connected to the Istanbul sea tunnel under the Bosphorus that opened in October to mark the 90th anniversary of the founding of modern Turkey.

Erdogan’s government is frequently criticised for its major construction plans that include a third airport in Istanbul and a third bridge across the Bosphorus. Critics say the government has pioneered grandiose projects to fulfil election promises ahead of the local polls in March next year. Opposition to the mega projects led to mass anti-government protests across the country in June that posed the biggest challenge to Erdogan’s 11-year rule.