Since the train control systems are critical systems, they must be certified according to strict guidelines, such as CENELEC regulations. These rules govern both the development process and the characteristics of the final product. 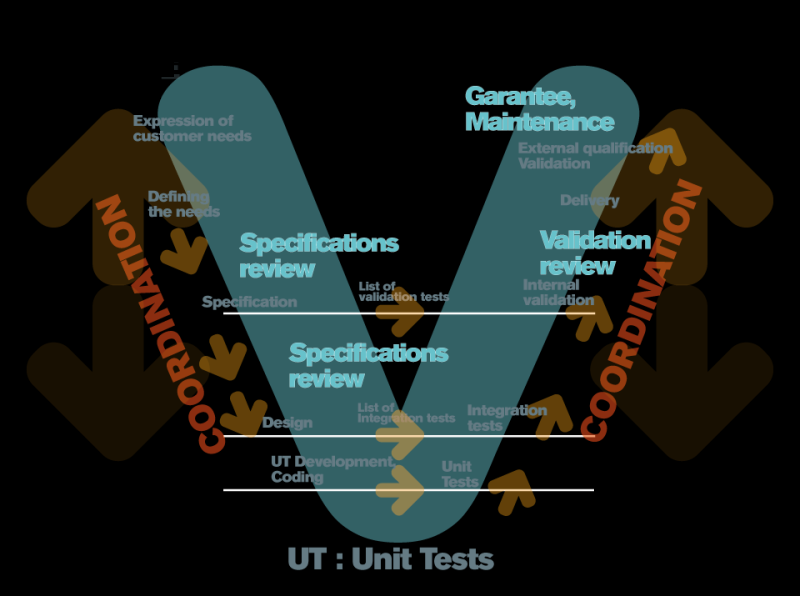 Since the train control and railway safety systems are classified as critical systems, they  must be certified according to strict guidelines, such as CENELEC regulations. These rules govern both the development process and the characteristics of the final product. For the “vital” subsystems the level of certification is SIL4 (Safety Integrity Level 4)with Probability of Dangerous Failure >=10-5 to 10-4 ), that require a “V” development cycle as shown in figure. The system safety requirements derive from hazard analysis, that according to CENELEC EN50129 are:

For hardware architectures, type NMR systems are used (N-Modular Redundancy) with independent output of the processing sections, differently developed, so as to limit failures that could compromise the integrity system. Even to the regulation of the availability requirements is clear and define the following failure mode:

For train control systems, faulty design or coding are not tolerated, because they could have consequences on Railway Safety. Therefore the majority of the software is verified through testing techniques, joined by measures code coverage and other static analysis in appropriate simulation environments like hardware-in-the-loop, where some components are executed on commercial hardware, instead others on the real platform, in order to try the hardware-software integration.