Interesting Tricks to Get a Train Moving

How to get a train moving? There's some interesting simple physics you need to know before I tell you that you need to move one car at a time... 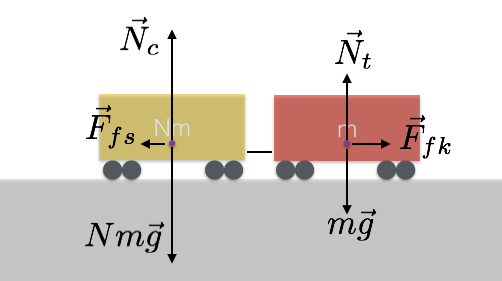 A long freight train it’s into the train yard, all the workers get in and the engineer opens the throttle: the train starts to pull away from the yard when they realize the caboose has a problem. The brake is frozen on one of the wheels of the caboose. The wheel is being dragged and there’s sparks and smoke.

Someone standing there says, “Stop the train.” So, they manage to signal to the engineer to stop the train. They can’t fix it, so they just cut the caboose loose. They remove it and they give him the go ahead. He gives it the throttle. The train doesn’t move. He gives it more throttle. It doesn’t move. What’s happening is the train isn’t moving, but his wheels are spinning. The cars aren’t moving. There’s nothing wrong with any of the remaining cars and there’s nothing wrong with the engine, but there is something wrong with the engineer.

The question is, what’s wrong?

The problem was that when the train attempted to start with the caboose brake on, it stretched all the inter-car couplings so that the whole train was just like one big car. At this point, the friction from the engine train wheels was not enough to get the whole thing going. Instead, you need to just get one car moving at a time – this is why there is space between the couplings.

There is some interesting physics here. In particular, there is something curious about the difference between static and kinetic friction. This two are quite similar but with some differences and the most important is: