Signalling is the control process Network Rail uses to operate train safely over the correct route and to the proper timetable. 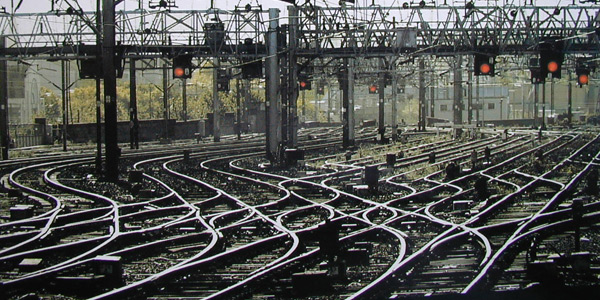 British Rail Network transports 3 millions passengers and 400.000 tons of fright today and is the safest mode of transport in Britain.

Signalling is the control process Network Rail uses to operate train safely over the correct route and to the proper timetable. The 2 key features of this process are line side signals and the block system. Network is divided in section (known as blocks) in order to avoid train collision, normally only one train is permitted in each block any one time.

British Rail Network uses line side signals to advise the driver the state of the track ahead. Most line side signals are in colour-light form but a significant number of semaphore signals remain on secondary lines.
The most modern signals have four colour aspects:

Signalling control was originally exercised via a decentralised network of control points that were known by a variety of names (including signal box).

The next peak leap in signalling control came with the electronic age and the advent of power signal control boxes.


Is very easy to work around, the signalling system is very user friendly and is very easy to see the layout of trains and where they are coming from and going to. Power signal boxes are regulated by a relay room, a little like a giant mechanical computer.

Power signal boxes are effective and safe but network rail is now introducing an even more efficient form of signalling control: the Integrated Electronic Control Centre (IECC). IECC consists of a number of operator’s workstations with VDU/LCD displays which depict the control area and is semi-automatic using Automatic Route Setting (ARS) – a computer based route setting system driven from a pre-programmed timetable database. ARS can also handle severely disrupted service patterns and assist the signaller in the event of train or infrastructure failures.